Prawns with the Heads and Tails on 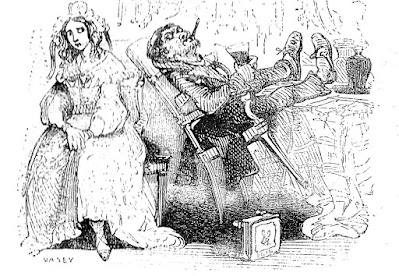 What put you off Dickens, you said, was his absolute moral certainty. And sure, I know what you mean: there is a juvenile insistence on innocence and depravity which can be grating. Especially the innocence part, which generally means a weak, languid inability to assert oneself. The Victorian enthusiasm for Little Nell strikes us as pathetic, if not pathological.

But as I read The Old Curiosity Shop, I am struck by the centrality of the demonic Quilp. The narrative adores Quilp: he draws Dickens' attention as Edmund draws Shakespeare's in King Lear. Whenever he is on stage, the language gains force; the dramatic intensity shoots up; everything becomes more vividly felt and extravagant. Sure, he's the bad guy: but without him, could there be a play? Of course not. What actor would turn down such a gorgeous role?

So Dickens may be morally certain, but his novels are not. What if the meaning of life is self-assertion and dominating your inferiors? How do you know it's not? Is it better to be Nell's grandfather, or Dick Swiveller, than to be Daniel Quilp? I don't think so, and I don't think the novel thinks so. I'm only a hundred pages in or so, which is barely getting started in a Dickens novel, but there's an interesting absence here: where is the young hero? Where is the young Dickens stand-in -- the Copperfield, the Clennam, the Pip? The shadowy narrator has already effaced himself and vanished. The entire field of virile masculinity is occupied triumphantly by Quilp, who faces down legions of discontented female rebels with ease and relish. I can't think off-hand of another Victorian novel that leaves the Young Hero slot so empty. Instead what we get is Quilp, leering at his mother-in-law in the mirror, and crunching up the heads and tails of prawns and the shells of boiled eggs.

Dickens, like Shakespeare, goes where the story takes him. And that to my mind is the whole duty of a storyteller.

When I realized how few books I would still get to read in this life -- do the numbers sometime, O fellow reader; you will be as appalled as I was -- I sketched out a course of "great books" to read. At first I had four historical categories, from which I'd pick books in turn. But soon I realized that might leave me reading, say, John Gower, or Ben Jonson, without ever having gotten back to Macbeth or Copperfield: that couldn't be right. So I expanded the categories to six: Ancient & Classical, Medieval & Renaissance, Shakespeare, Enlightenment & 19th Century, Dickens, and Moderns. And then I said the hell with it. I could die tomorrow. It's Dickens and Shakespeare that I want to read. Gower and Jonson can wait: they can wait till my next life, if necessary. And suddenly all my vacillation and weariness about reading were gone. I will crunch up my Shakespeare plays with their tails and heads, and my Dickens novels with the shells: and be damned to comprehensiveness or correctness.

Posted by Dale at 8:39 AM
Email ThisBlogThis!Share to TwitterShare to FacebookShare to Pinterest