I thought this book was important: 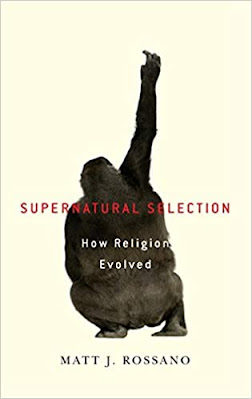 William James made a breakthrough (in my opinion) by turning his attention from the claims of religion (is this or that true?) to the experience of religion (what is it like to pray, to be in the Lord's presence, to make offerings?) Rossano turns his attention to: what does religion do? What can an endangered savannah ape that gets religion do that it couldn't do before?

Well, it can take over the world. For better or worse. Every community can redesign its modes and intensities of cooperation. Individuals can engage in practices that elevate their sensitivities and develop their intellectual and imaginative capacities. Suddenly sacred places appear, and sacred art appears in them. These apes become ever more bizarre and unpredictable.

Divinities serve -- this is my interpretation now, not Rossano's exactly -- as variables in the algebra of human relationships. When you achieve variable in mathematics you start be able to solve, not just  particular problems, but general ones. And when you have divinities you start being able to think beyond the particulars of "what to I owe Joe?" or "what do I owe Nancy?" to "what do I owe people in general? What is the right way to behave? Precisely because a god -- a person with whom you have an intense but infinitely malleable relationship -- is usually absent, you can configure different solutions to human equations. You can tinker with social relations in a way that you could not before. Some of these solutions were spectacularly successful.

Posted by Dale at 7:57 AM No comments:
Email ThisBlogThis!Share to TwitterShare to FacebookShare to Pinterest

Five years ago today I undertook my last weight loss attempt. I had failed so many ways so many times: I promised myself this is the last time. No more.

That was the deal I made with myself: if this didn't work, I was going to stop, and just accept being fat, and get on with my life. I had already sunk an extraordinary amount of time and effort and anguish into the project. I needed to either succeed or fail. Whatever life was for, it couldn't be for struggling endlessly with this ultimately trivial issue. Who cares if I'm fat? What difference does it make?

The date I picked for the decisive day, the day I'd decide if I succeeded, was five years in the future: May 17th, 2022. I didn't just have to lose the weight -- I'd pulled off significant weight losses before, that wasn't the problem -- I had to get it off and keep it off. My target was 180 lbs. After five years, I reckoned, you could reasonably claim victory.

Today I weighed in at 170.2 lbs. So I succeeded! Kind of. But that's twelve pounds more than it was three months ago. As I succeeded in losing weight, and dropped all the way down past 180, down into the 150s, I revised my target, as one does: my target now was to have my waist measurement be 90% of my hip measurement. I'm at 94% now. Which isn't bad: but it's not the target. And the larger fact, it seems to me, is that after all this time and work, my weight is still not stable. The whole idea of the win-or-lose showdown was to be done with the damn issue, one way or the other. The real outcome, it becomes clear, is this: I will never be done with it.

It was realizing this, perhaps, along with other stressors, that sent my on my latest series of binges. When I was really faced with doing this forever -- eating the same thing every day, tracking meticulously, weighing and measuring -- a large part of me rebelled. Screw that. What is it for? said the rebels, and for a few weeks they had the upper hand, and binge-eating was the order of the day. (Or the order of the evening, actually: the evenings are generally when these collapses occur.)

What drove all this was the idea that my daily life might look different, at my goal weight: that I might be able to indulge occasionally, as normal people do, without getting fat. This is clearly untrue (For myself as I am now. There may be future selves that have wider options, who knows?) As I am now, I have only two paths open to me.

So this is clarifying. And which path I take is obvious. Onerous and discouraging as the path of restriction is, it is less onerous and discouraging than the path of bingeing. The thing about the bingeing is that it's intrinsically deluded. My mind is inflamed with the idea that there's satisfaction somewhere, on the far side of that bowl of ice cream. But on the far side of that bowl of ice cream is... the craving for another bowl of ice cream. And beyond that again, another. What stops the binge is not being satisfied: what stops it is the sheer discomfort of having eaten a week's worth of calories in a couple of hours, and the glut of a certain crooked longing for... humiliation? Breaking the lares? Dunno. I get gleams of pleasure -- especially early on -- but they're extinguished by the anxiety of the craving really rapidly. Very soon, only the anxiety is left. The whole thing is a chump's game. The reward never really comes. I catch certain of the rebel forces trying to convince the populace that we have in fact experienced satisfaction. My populace is not quite that dim. We have not experienced satisfaction, and they know it.

And that actually is the resolution. What I'm faced with here is not a trivial issue, after all. What I'm faced with is life: my relationship with food is just the part that's been under the bright lights lately. If I want to be my own master -- to have agency in the world -- this is the price: exercising control. Setting limits. Planning ahead. Being an ordinary creature subject to the ordinary rules of life.

So does this mean I never get treats? Well, it does and it doesn't. Of course I will get treats. Of course my self-regulation will collapse from time to time, and I will binge: that has remained true all through this process, and presumably it remains true all my life. There will be birthday dinners and Thanksgivings. What there will not be is a magical exit from the rules of causation. Which I think is what the eagerness for treats actually amounts to: to stubbornly clinging to the hope that the structure of the universe will change. That the adults will let us stay up late and we won't get tired and we'll be able to have fun forever.

Much more important than how I manage my eating is this: I am gradually learning -- this is remedial learning, something I should have learned in childhood -- to get ahead of myself a little, to plan and execute in my own person for my own ends. And that is not trivial. That's the project of inhabiting my own life, as I've written many times. I want to live in my life, not camp out in it. I don't want to be a tourist here. I want to be a local. And there is no time I feel more like a local than when I am following my own regimen: when I get up in the morning to the ritual of making the breakfast I prepped last night, or when I wash the week's apples as the finishing touch of putting away the week's shopping. Every time I follow through on a commitment to myself, there's a moment of relief, of rightness.

So call it a success, or call it a failure. It's both: but it ain't over.

Posted by Dale at 11:54 AM 3 comments:
Email ThisBlogThis!Share to TwitterShare to FacebookShare to Pinterest
Labels: Whupping the Food Thing

It took an unexpected bounce. I was following the thing to the end,
because I believe in following things to the end, and because I
didn't want to, and I believe in doing things I don't want to do, too.
Eventually. So it seemed clear enough: I couldn't find any mistakes
in the chain of reasoning. Elect one thorough nut-job per century
to the helm of a nuclear power, and sooner or later, the bombs fly.
And then all the people are dead. At which point most things
are drained of what we usually call meaning, right? The kids
you worked so hard to keep alive, their kids, everybody's kids --
Welp, there they all go. What was the point of that? I mean, you
can rhapsodize about eternity in an hour, and all that, but I find
the blackened corpses of my descendants discouraging. Maybe
it's just me. But to proceed: I read somewhere that someone
thought eukaryotes anyway would make it through a nuclear winter.
And from there the game could begin again. We've still
got billions of years: plenty of time. Though I'm sorry about the cats.
So then I think: do I care what happens to the creatures
who finally make the leap? Make it for real, I mean? And I thought
well, I do if they're good. And there I paused: a new scent
was on the wind. If they love what's beautiful and worry what's true:
well, sure I care. And I wonder how to leave them a message, and then
I wonder what message I would leave? "Be careful, dears, there's
a tricky part that comes when you industrialize"? "Put your house
in order before you learn how to burn it down"? Hard to know
what they'll need to know, and whether they could learn it from us anyway.
Maybe every teenager needs to wreck his own car. I don't know. But
True, and Beautiful, and Good: those are Plato's words, and
I would have sworn I'd left them long behind. But suppose, suppose
these things come down from the top as well as up from the bottom.
Suppose the god is imaginary to start with, but slowly becomes real
And begins to create his creators. Suppose the flow reverses, or rather
suppose it goes in both directions, both at once, all the time: the ideas
rising from our snuffly snouts and dreams of fruit, but also seeping down
and making sense of us, make sense through us. How do we know
after all, that what we grope for is not a thing that is becoming real,
more real than the hand that seizes it? How do we know? That scent:
a new scent on the wind. And I, as old as Odysseus's dog,
lifting my head. Wine and wrestling oil and clothes
damp with sea-rinse: surely I knew once what that meant?
Posted by Dale at 10:33 AM 7 comments:
Email ThisBlogThis!Share to TwitterShare to FacebookShare to Pinterest
Labels: Poems
Newer Posts Older Posts Home
Subscribe to: Posts (Atom)