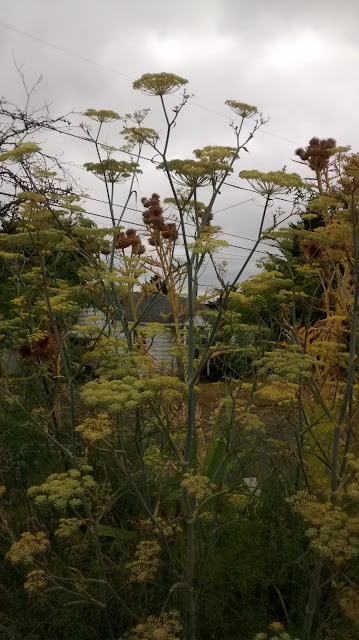 I said to myself, "I need to take a walk and figure out what it is I want to be doing for the next ten, twenty, thirty years."

I started walking, and realized: "no, I don't need to figure it out. I need to discover it. I've gone as far as figuring is going to take me. I need to speculate -- brainstorm -- and then try things out. Run pilot programs. The last thing I need, right now is to figure things out."

My life is already replete with rumination. I do all the ruminating I could possibly need to do. What it lacks is experimentation. I need to build prototypes, and see how they perform.

Corymb: an inflorescence with the flowers growing in such a fashion that the outermost are borne on longer pedicels than the inner, bringing all flowers up to a common level

Woke to silent lightning, this morning. And now the daylight: slow and halting, and as yellow as evening light. The sound of a sparrow bathing in a plastic tub lid, and little chirps and quick leaf-shudders in the hedge. It's quiet this morning, as quiet as a weekend morning: maybe lots of people are already embarked on their Labor Day weekend? But the chickens are finally tuning up, with those long, quavering moans. "My God," they say, "I can't believe it's another day: why, O Lord?"

I think of moving to a riverside cottage, if such a thing is still possible, and learning to shop once a week, and going for long walks at dawn in the hills. I used to be sure I wanted to be forever in the city, where things were happening, and there were lots of new people to fall in love with. Now -- I don't know. A quiet morning and flowing water, maybe a kingfisher, the splash of a fish? I tire of fret and striving and hysteria of high-strung, overcrowded primates. Who cares what anyone thinks of me? And what new world is going to be brought to me by strangers? All the worlds are old, now.
Posted by Dale at 7:57 AM 6 comments:
Email ThisBlogThis!Share to TwitterShare to FacebookShare to Pinterest

The Fall of Meredith


In my youth, George Meredith was one of those novelists you were always going to get to one of these days. There was no hurry. His novels were always sitting, fat and well-bound, on the library shelves. But I never did get around to him. A couple days ago until I happened to pick up Chesterton's little book on Victorian literature -- sheer happenstance: my eye had fallen on it at the library when I was looking for something else -- and there was Meredith, ranked beside, if not above, Thomas Hardy. Huh, I thought. I'll read a Meredith novel. After poking about a little I settled on Harry Richmond, and went to the library website to slap a hold on it: that's the usual way I obtain books these days. To my astonishment, they held exactly one Meredith novel -- The Egoist -- and that was that. The solidity and permanence of Meredith was a mirage, a trick of the light.

I was piqued, rather than discouraged, and went off to Gutenberg. Sure enough, plenty of Meredith there, although apparently not much in demand. So now I'm eight chapters in to Harry Richmond. It's interesting, so far -- well worth reading, and it casts oblique lights forward and back. Many of us young men are in a similar plight, I often think: raised to princely expectations, groomed for monarchy, and then rudely thrown into the world as ordinary people after all.

I wonder why Meredith fell? So many mysteries.
Posted by Dale at 5:37 AM No comments:
Email ThisBlogThis!Share to TwitterShare to FacebookShare to Pinterest


Cool morning air drifting in from the windows; a light blue sky beyond the hedge. For the moment, untroubled and at peace.

It's an arborvitae hedge. Martha pronounces it, charmingly, as "arborviety," rhyming with "variety." Tree of life, that is, which seems a little highfalutin for a hedge shrub. But apparently it got the name because tea made from it cured scurvy.

It's a kind of cypress. A thuja. The which name is another anomalous perplexity, at first sight, but it turns out to just be an odd spelling of the Greek name for a particular sort of cypress. Thuia, would be the normal English spelling. What possessed some botanist to spell it with a 'j'?  'i' and 'j' are originally just variant forms of the same Roman letter, but to anyone with linguistic sensitivities the 'th', which fairly screams its Greekness, sits very uncomfortably in the same short word with a Latin 'j'.

I do not know why cypress trees are associated with sadness, though I suppose the internets would tell me. They don't strike me as particularly sad trees. A little dusky, but not strikingly dark like a yew.

Come away, come away, death,
And in sad cypress let me be laid;
Fly away, fly away breath;
I am slain by a fair cruel maid.

... I'm back! The internets say that of course cypress trees are sad because once upon a classical time Cyparissus accidentally shot and killed his pet stag, and he made such a nuisance of his grief that the gods turned him into a tree: an immortal cypress so that he could grieve forever. But then other of the internets say that Cypress trees are not only immortal but protective (here the arborvitae theme is foreshadowed, no?), so they're planted in cemeteries to guard the dead from demons. That seems more likely than the stag story, but of course you never know. So I will put Mr Vignali's picture up top. One does hope he gave the model a comfortable pillow to embrace, but artists are notoriously ruthless.
Posted by Dale at 8:17 AM 3 comments:
Email ThisBlogThis!Share to TwitterShare to FacebookShare to Pinterest
Newer Posts Older Posts Home
Subscribe to: Posts (Atom)