Inside the Box: the Maintenance Plan

I did not have a very well-thought-out maintenance plan, the last couple times I got to my goal: just a fairly vague idea that I would "level out" by adding some calories back in. Exactly how many calories, and how I would pace myself on them, I didn't specify, so naturally what happened was that I just eased the restraints a bit, and what naturally happened after that was a period of binge-eating. Just as revolutions tend to break out when conditions are getting better, bingeing tends to happen when my calorie allowances are increased. The urge to break out of restraints is stronger when those restraints are loosened.

It didn't help that my graphs were all weight-loss graphs, not weight-maintenance graphs. They weren't  well adapted to visualizing what I wanted to visualize. These things matter, for me.

So the new graph is this one here: 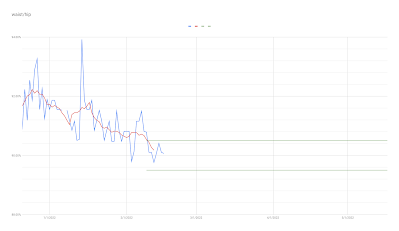 The thing being measured here is my waist measurement divided by my hip measurement, expressed as a percentage. The blue line is a three-day rolling average, and the red line is an eight-day rolling average; and the object of the game is to keep the red line "inside the box," that is, in between the two green lines, which mark out 89.5% and 90.5%. The plan is to keep my current regimen until the red line bashes into the bottom of the box, probably in about a month, and then to add a daily hundred calories, so as to spend a month wandering back up until it bashes into the top. Then reduce calories again, and repeat, indefinitely. (One of the things to be discovered is roughly how many calories it takes to "change direction.")

I mulled over other plans, but I think I like this best. I don't want to be "changing direction" daily or even weekly. Plus I suspect that it will be easier to build and retain muscle if I have weeks-long periods of mild calorie- and protein-surplus, alternating with weeks-long periods of mild calorie- and protein-deficit. I used to envision a steady state, a stable weight that stayed within a couple pounds of some number or other. I no longer think that would be necessarily desirable -- or an easy state to attain. Things shift too much: demands and stresses alter. I need a dynamic system that accommodates them. I hope this plan will be easier, and more flexible without entailing more decision fatigue.

Posted by Dale at 8:28 AM No comments:
Email ThisBlogThis!Share to TwitterShare to FacebookShare to Pinterest
Labels: Weight, Whupping the Food Thing

My kind is doomed
but since when was I a partisan of men?
My country is ruined
but since when was I a patriot?
My loyalties
are elsewhere. To the violet
swell of the sky against the east:
to the long pull of words
muttered by soldiers going
to pile their bones by the lake.
I have Du Fu for company,
and Ovidius Naso;
you could travel further
and do worse.
Here on the desolate shore
the geese in desperate strength
lurch into the air,
grunting and bleating
laboring and creaking
with the weight of wings and wind:
doomed like the rest
but clear on what they want:
A quiet shore,
and a partner to glide
a wings-length behind and a hand to the right
into the shadow of a northern bank.
Posted by Dale at 7:47 AM 2 comments:
Email ThisBlogThis!Share to TwitterShare to FacebookShare to Pinterest
Labels: Poems

The biggest illumination from my American history binge so far: the Civil War was every bit as popular in the North, at its outset, as in the South. Finally the gloves were off. The South had held the Senate in a hammerlock for long enough. The North was going to kick the slaveholders' butts six ways to Sunday, and it was looking forward to it. Volunteers flooded in faster than they could be armed and organized.

The war was a religious one. They were going to purge America of sin. And what would become of the slaves and free blacks afterwards... well, that would fix itself somehow when the time came. What the pro-war Northerners wanted was not so much to release the slaves, as to release themselves from the South's continual sabotage of their efforts to create the Great Universal Republic of the New World. They wanted to be emancipating slaves, building canals and railroads, facilitating capital, civilizing savages: the Southern bloc prevented them at every turn. They couldn't just let the South go, because it was bound up with dreams of empire and manifest destiny. A rival republic was the last thing they wanted, politically or ideologically. They considered their virtue and their polity the manifest endpoint of history, the denouement of God's plan for bettering mankind. I think you miss the point of the Civil War if you don't grasp just how offended and insulted the North felt.

Of course there were individuals who were motivated by compassion for the slaves, and even a few who would subsequently welcome free Blacks into the North. But there weren't all that many. Mostly they were fighting for that shining city on the hill. It's a story that gets into your blood. We sang that song again in the 1970s:

We are stardust; we are golden.

And here we are: having learned nothing: wanting to learn nothing: itching to resume the war.
---
Personally? I would fight the Civil War over again in a heartbeat. If General Grant sent me against the trenches at Cold Harbor, up and over I would go. I'm not immune to the shining city.
---
But if we are going to draw any lessons: surely the first is that problems do not fix themselves.
---
Well. A dirty sky, and a dreary cold day ahead. This winter has settled into my bones as no other ever has: for the first time I understand people going away to sunny places for vacations. I could stand a week or two dreaming in the sun.
Posted by Dale at 8:53 AM 1 comment:
Email ThisBlogThis!Share to TwitterShare to FacebookShare to Pinterest
Newer Posts Older Posts Home
Subscribe to: Posts (Atom)