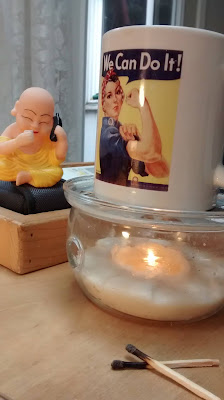 I have lost the knack for joy
, I wrote, and then I studied the words for minute. Were they true?

The more I thought it about it, the more I decided they were. I am notoriously bad at personal history -- I never know when or how things happened, and I often find, when I examine my just-so stories about myself, that they're absurd. I'll think event X caused personality defect Y, when a cursory review of the documents shows that Y was in full force years before X. My past is strewn with documents, so it's not that hard to check.

But with all due skepticism, I trace this loss to Mr Trump's nomination, campaign, and election; and then the pandemic set the seal on it. I lost the knack for joy: and I lost much of the impulse to write, which was tightly interwoven with it.

As I watched Trumpism wash through America, I thought again and again: "what was my contribution to this? How did I make this happen, or allow this to happen?"

Well, the answer was clear. I had a least one devoted reader who was also a devoted Trump fan, and I recognized at once that I was appealing in exactly the same way Mr Trump was. I used to practice a sort of diaristic magical realism. I talked to stars and mountains and ghosts. Something that appealed emotionally got free rein, and if facts got trampled in the process, who cares? Other people would take care of the facts. I was busy with the realm of the emotions and of the soul. What I was interested in was joy and delight. Nothing else mattered, not really.

And so I was shocked into silence, inward and outward. I didn't want to be part of spreading this poison. I mistrusted myself deeply. I stopped my supposedly harmless riffing on supernatural themes. No, I'm not meeting Vajrasattva in the parking garage. No, I am not conversing with ghosts. No, I am not dissolving into the wind. I'm someone who washes his hands and wears a mask and is determined to get the vaccine, because viruses don't give a damn about Vajrasattva and never have. Misty devotion to to deities such as the Great South Wall Protector lead straight to children in cages. The hell with misty devotion. The hell with deities. I'm trying to keep my family alive.

When I was setting out in life, the Enlightenment looked like a done deal. Everyone acknowledged the primacy of science. I gave myself to old books and old stories, partly because I already loved them, and partly with a sense that the post-Enlightenment world was losing something precious: that a salvage operation was in order. That we were throwing sources of joy and wisdom out, as well as sources of superstition and bigotry, The march of science was inevitable: it had the backing of the liberal West, of Soviet Communism, and of global Capital: how could it falter? It needed no help from me. I could wander among the wreckage of our cultural past, find lost treasures in the rubble, wash the mud off them and hold them up to the sun.

And the treasures are there, sure enough. I was right about that part. But science, reason, rationality, commitment to what can be ascertained and confirmed by rigorous experiment -- they turned out to be as fragile as the treasures I was hunting. I had misunderstood. It was all fragile.

The joy blew out like a candle, and I lost my place. I read political news in the morning, instead of poetry. I begin a novel and drop it impatiently: they're just making stuff up. Anyone can make stuff up. The hard thing is sticking to the truth.

I don't quite recognize myself, in all this, and that's probably a good sign.

In order to arrive at what you are not
You must go through the way in which you are not.

Posted by Dale at 9:37 AM
Email ThisBlogThis!Share to TwitterShare to FacebookShare to Pinterest

I feel like I've lost the capacity for joy too, but for other reasons. The inside of my own head, my own horrible failings, the losses and looming bad things, small and large, personal and global.

But as to the idea that you somehow cultivated Trumpism by revelling in literary fancy without posting caveats for one Trumpist is as magical as anything about moments of revelation in carn parks... what? I ... what?

And many horrors have been done in the name of science, and will be again. We use it very badly. It'll be interesting to see if we bring on the apocalypse because we reject science, or because we elevate it to omnipotence.

I always felt like the difference between Fox News and the Daily Show was that one had the integrity to call itself comedy and I'm wondering if imagination isn't the proper realm of poets. It's so cool though to take responsibility for one's part in things we prefer to see outside ourselves.

Your last two entries, it's like you're in my head.

Jo: well of course, I've had no meaningful impact on Trumpism at all, just as no vote I've cast has ever had any meaningful influence on an election. I vote nevertheless, and in the same way I try to weigh my social influence. I've been part of the growing American contempt for expertise and the glorification of intuition, and having watched their consequences play out in political rhetoric and public health policy, I no longer want to be.

Alexandra: yes, maybe I don't need to throw out the baby with the bath!

When he was elected it made me realize how much I took for granted that The Science (among other things) was being taken care of by some other people. Who these other people were was beyond me. But they cared a whole lot and took care of such things. There were lots of reasons I went back to school, but I know a main theme is the fragility you mentioned. I suddenly felt very responsible for helping to maintain a truthful human record, and the best way I could figure out how was to become as literate as I possibly could in the most basic ways that things work.

I still don't recognize myself in it. I wonder how long it might take. If ever. Wanting the joy back feels selfish. Though I know that's just the trauma talking. It feels strange to think back that joy was my everyday tool. I used to be able to call it in under my hands in an instant. What used to be pure sunlight is now a tiny flame that requires constant fussing and nurturing.