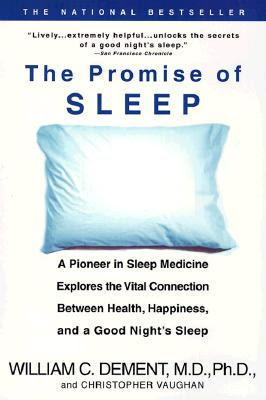 William Dement, a sleep researcher at Stanford, convinced me with this book of the importance of light hygiene. I do not sleep well if there's any light in the room. The modern world is full of light sources: clocks, power strips, computers -- even when they're supposedly off, our myriad electronics have little LEDs glowing, red or green or yellow, little eyes in the dark. Real darkness is not a matter of turning off the lights. It's a matter of blacking out your windows and covering up all those little eyes. Dement demonstrated in the lab that even these little increments of light disturb people's sleep: although they're unaware of why, they sleep less soundly and wake more easily in the presence of even very little light.

Sleep gets its own entry in my "whupping the food thing" series for two reasons. First: sleep is the great restorer of oomph, and everything about whupping the food thing rests on oomph. To eat right I need to plan ahead, to not always take the easy way, to throw myself into the fight with some vigor and enthusiasm: above all, to keep out of temptation's way, and to occasionally resist temptation if my planning fails. All those things require oomph, and if I start the day with a meager supply, chances are there won't be enough when my trough times come. If I'm exhausted, grieved, discouraged, and out of oomph by mid-afternoon, the odds that I'll be gorging on ice cream and potato chips before the end of the day skyrocket. I can't afford not to get a good night's sleep.

The other thing sleep does is relieve persistent pain. I'm not sure if it does this by actually encouraging the repair of tissue, or more subtly by somehow resetting the brain's pain responses, but the effect is striking. Most people my age or older are navigating their exercise around some pain or other, their "bad knee" or their "tweaked back" or something: we're working the trade-offs between the benefits of exercise and aggravating some pain or other. The catch-22 here, of course, is that to really get a good night's sleep, you have to exercise. I have clients in whom this has spiraled down to an almost sleepless and completely pain-filled life, getting around by motor-chair because they can't walk on their excruciating knees, unable to drive because they fall asleep at the wheel, unable to sleep because their body is desperate for exercise, and unable to exercise because everything, everything hurts. Trust me: you really, really don't want to go there. And the simplest intervention in this vicious cycle is a remarkably easy one. Block every single damn light source, block it completely. If you want to get fancy, it also helps to quit using televisions and computers for an hour or two before bed. Those are both powerful light sources, and you stare straight into them. I've never managed to do that: I'm too fond of dinking around on my computer in the evening. For me, it's enough to make it dark dark dark. Blackout curtains, clock hidden under the bed, duct tape on the power strip light. Really dark.

What does avoiding pain have to do with whupping the food thing? Well, exercise turns out to be critical for a normal metabolism. Whatever goes wrong with modern metabolism, and disposes us so disastrously to type II diabetes, cardiovascular deterioration, and cancer, study after study shows that exercise militates powerfully against it. I believe there's much more to it than the simple fact that exercise burns calories: the human body is designed for activity, and a whole slew of things begin to go wrong when it's sedentary, a cascade of ill-effects and metabolic abnormalities. My guess is that almost nobody with disordered eating regulation is going to really fix it without becoming active: and that almost nobody sedentary is going to become active if it's painful. So we come back to sleep. Protect it, cultivate it, defend it fiercely. Sleep is your friend.

Dale, do you have Flux installed on your computer? It changes the wavelength of the light to make it warmer and less disruptive to the circadian rhythm. (Plus it looks better!) stereopsis.com/flux/

Thanks, I'll try it! I remember you mentioning it before --

I can't stand any light at night, never could. My chiming clock has no lights.

If you do have an indulgence with food, going for something really amazing makes snarfling cheap chocolate very unappealing. So, the best, most expensive frou frou bakery treat, once in a while. And I turn my nose up at M&Ms.

Certainly sound advice, the importance of sleep. I can appreciate how even the smallest of lights can be distracting, but for me, at least for now, it can be daytime and I sleep quite well.

One other tip I learned is to never look at a clock in the midst of sleeping. If you do, your brain will start to do things like calculate how many hours of sleep are left, what the routine is in the morning, what is in the day ahead, and so on.

About exercise, I've noticed that when I do a vigorous exercise routine, I tend to remember my dreams at night.

@Zhoen, that sounds like good advice! It's strange how my taste for sweets has just vanished, over the past couple weeks. I'm sure it will be back.

@Phil, ah, if I *don't* look at the clock I assume it must be close to time to get up, and start winding myself up for the day :-)

Kat,
Thanks, send my dear one that link, he's got it running, I hope it helps him.

Dale,
Took me a while to trust that my clock is working, and I tell myself whatever time I like. On the other hand, I sometimes wake up certain I've heard the chime, get up, and it's nowhere near morning, and the chime was in my head.

Reminds me that I want blackout shades. My bedroom is lit by a village lamppost--very pretty--and they put a black panel in on the side of my house. But it's light.

The tending to remember dreams after exercise comment is interesting. I've had such a series of viruses that I've almost quit exercising and need to start up again.

You know, the thing I would recommend for an older person who hurts too much (in the knees etc.) to exercise is a high quality rebounder equipped with a stabilizer bar you can hold onto--and then not to jump and exercise on it so much as to just go up and down lightly with your feet on the mat, holding on. Do a little bit more each day until stronger, then more, then eventually start flying up and down and doing movements. I cracked something in my right knee while daydreaming (ah, lovely stories!) on some fancy exercise equipment (didn't reset the knee weight), and I credit rebounding with making me feel close to new over time. The knee still hurts sometimes, but it's basically usable and sturdy again. I've never had a bar, but I think it would help a pain-ridden person stay the course.

Marly, thanks, & yes! I so often see clients who desperately need to get started exercising again go to some fit young trainer who encourages (or even bullies) them into exercise beyond their tolerances, which exacerbates all their pain. Whereupon, of course, they quit, as anyone with any sense would. I'm sure there are good trainers out there, but I've come to view the whole species with considerable dislike.

I know that he is right but I can't sleep in a totally dark room. It's just too scary. And the window has to be open (although the birds will sometimes wake me too early then), otherwise I'll have the feeling I can't get enough air but a headache instead. I always remember my dreams the next morning, sometime even more than one.