The Quiet and Dark of Winter 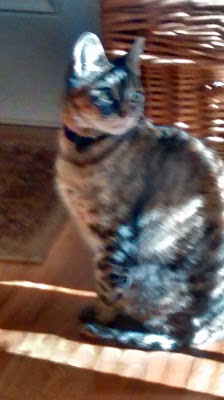 She's gone: missing three days now. Martha thinks she's just hunkered down somewhere. My conviction immediately was that she is dead: that she sensed the onset of heart failure, or kidney failure, and crept under a bush somewhere to be still. I walk around the neighborhood, making my little "come get dinner!" clicks, and calling softly, sometimes. But I'm not really calling: I'm summoning the past.

We've done all the things, of course. Now the days just drift by. On one of them we'll wake up with the new reality as settled business. Not quite yet though. 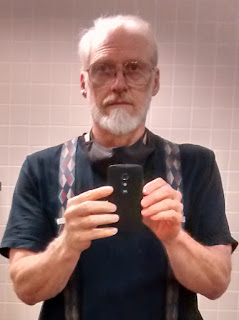 A rare, obscure impulse to take a selfie on Sunday: there I am, still embodied, with a mask around my neck.

The rains are here, finally, but the lawns haven't even yet entirely greened. Still, this battered little city seems to have escaped the drought summer without a major smoke event, so we can count ourselves lucky. And now we go on into the quiet and dark of winter.

And, just like that, two weeks gone. I didn't feel like posting this right away and getting a lot of "hope your cat's okay!" and "my uncle's cousin's stepbrother got his cat back by posting tuna fish pictures on the internet," and so forth. Also actually posting a picture of myself as an old man held me up. I keep thinking there's some mistake: I can't actually be old. If I come back to the post, and the picture, surely something other than an old man will be looking back out at me? But he's still there, so -- out into the world he goes.  Whoever he is.

How am I to live? I don't even know if that's the right question. Or rather, I suspect it is a question that answers itself: as a directional indicator, at least. If you wake up wondering, "how am I to live?" then you can be confident that you're moving, or at least facing, in the wrong direction. At present the sun is obscured in a pure white sky, so it's difficult to guess where the it might be. And likewise, every way I face seems to bring the same question. The failure of orientation is so complete that it suggests a sensory breakdown. If no attempts at light bring anything but darkness, then Mr. Occam would suggest that the problem is not a lack of light, but a lack of sight.

So "how am I to live?" has a simple and direct answer, valid under all circumstances. "Not this way."

Lear's mistake is to try to lay down his burden. He thinks that he has earned a rest. Nobody earns a rest. We just go to our rest, when we are called. All that trying to lay your burden down ahead of time does, is deliver you to the mercy of hellkites, and take your true and loyal daughter away from you.  You may not understand it, but you are holding something together. It is not your job to second-guess the future. It is your job to pay attention to your nearest and dearest, and use whatever meager discernment the years may have given you.

Posted by Dale at 9:03 AM
Email ThisBlogThis!Share to TwitterShare to FacebookShare to Pinterest

If it helps, when I looked at the photo all I thought was "Nice forearms."

"It is your job to pay attention to your nearest and dearest, and use whatever meager discernment the years may have given you."

I am sorry about your sweet little cat friend.

I am sorry your cat is missing. I have experienced that in the past twice, once with a beloved outside cat who never did return, and once our little Sheltie, who disappeared from the backyard. Both times were very worrisome and sad. He was gone a month and a neighbor of ours happened to see a found dog notice in a local paper, I called the number listed and the man asked me a bunch of questions, including our dog's name and when the man repeated it, he said to me on the phone, "Well this must be your dog, he jumped up and came running and is wagging all over after hearing his name. We went to the man's house and our Sheltie, Dandy was beside himself with happiness, and so were we. I was crying for happy. It was awful when he was gone, worrying about him, was on my mind day and night, until we finally gave up. A couple of days later is when our neighbor saw the saw dog ad.

I hope that your kitty makes it back to you.

I always enjoy seeing a picture of the person behind the blog. Don't put yourself down, you look good.

Whenever one loses a four-legged family member, it is always with difficulty that one copes. I have loved and lost too many in the past: it is the way of things. My thoughts are with you.

I'm chewing on the Lear interpretation. I like that play even though it makes me so angry. It being the old man and also the unfairness of the whole world.
We would spare these little animals pain and fear if we could. Sometimes we can.

Fuck me. Came from Murrmurrs. You seem to speak to my soul.

‘Tis a fearful thing to love what death can touch. ~ Judah HaLevi

Hey, thanks all. So glad you're here!