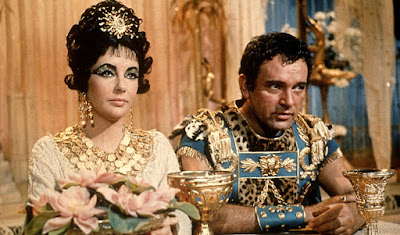 Witen. Forgive me for using the door marked "gentlemen":

my need was great. There was none marked for knaves.

The trouble with reading Shakespeare is that pretty soon everything comes in pentameter, and you are liable to come down with the dread Middlemarch Epigraph Disease.

but this wording of our great original

o'erflows the measure: 'a speaks of antic turns and japes,

Second Gentleman. And affecteth the grammar of a bygone time:

'a useth 'thou' and 'ye' consistently,

as never yet the Bard did in his life.

But I am besotted with Antony and Cleopatra. As always, I begin reading it with great dislike: for the first two acts there's no one on stage who is not detestable, in one way or another; the "haw haw aren't women stupid, and aren't we stupid for liking them!" jokes don't land with me as they're aimed; all the "great Antony" this and "great Antony" that is annoying when the only Antony we've seen is a vacillating nincompoop. Antony and Cleopatra when they're riding high are thoroughly unattractive.

But then they start to lose, and gradually they acquire a weird grandeur. They actually are, in their way, thoroughly devoted to each other and thoroughly devoted to their love: and they're quite willing to pay the price of it. Antony sends on Enobarbus's baggage, and we finally glimpse the great Antony of hearsay. The grief and nostalgia is particularly poignant for us, maybe, equally belated, equally overripe Americans, mourning the democracy-in-arms of Eisenhower.

His legs bestrid the ocean: his rear’d arm
Crested the world: his voice was propertied
As all the tuned spheres, and that to friends;
But when he meant to quail and shake the orb,
He was as rattling thunder. For his bounty,
There was no winter in’t; an autumn ’twas
That grew the more by reaping: his delights
Were dolphin-like; they show’d his back above
The element they lived in: in his livery
Walk’d crowns and crownets; realms and islands were
As plates dropp’d from his pocket.

Posted by Dale at 7:58 AM
Email ThisBlogThis!Share to TwitterShare to FacebookShare to Pinterest
Labels: Shakespeare

Ah, that is a lovely crossing--how words win you over.