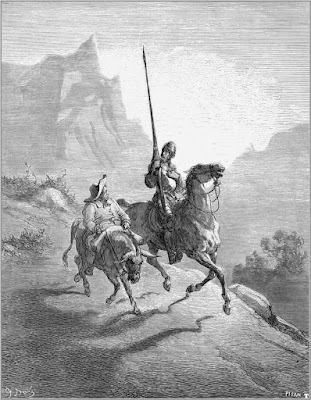 There's a couple things taking shape. One is that the jury is no longer out: except within very strict limits, social media has to go. I'll keep an handhold on Twitter and Facebook, to link to posts here, and I'll probably set aside some time to check it once a day. It is, after all -- as Dave Bonta says -- where the people are. But it consumes too much time, and it fosters a habit of demanding continual stimulation that is ruinous. Enough already. I'm pretty much done with it.

Second. I've been thinking long and hard about the project of learning Spanish. There have been two goals there, really, though I haven't really distinguished them and considered them separately till recently. One was to learn Spanish well enough to read the Spanish classics: at least the Golden Age dramatists and poets, and the 20th Century Spanish and Latin American poets. The other goal was to "really" learn Spanish. Which involves a lot of listening, writing, and speaking.

For goal one, reading Spanish literature, I'm on the threshold of that now. I could plow into Calderón and Quevedo tomorrow and give a good account of myself. I can cruise through an uncomplicated modern novel at a rate of thirty pages a day, my passive vocabulary is pretty extensive, and I have the background.

Goal two is more problematic. I am shy of the exposure of finding native speakers and practicing conversation, which is the royal road to fluency (whatever that is), but, more legitimately, I am asking myself: is such an investment of time worth it? Because it is, simply, time. Hours of time daily. There's no way of finessing that. And it's time spent in order to be able to watch TV shows and have casual chats. Do I really want to watch TV shows and have casual chats? Those aren't things I much care to do in English, actually. How much do I want to do them in Spanish?

People talk about an hour a day as though it were a trivial investment. Actually it's large proportion of one's disposable time. It's something to weigh seriously. It's time that I would not be, say, writing, or drawing, or coding, or learning some other skill.

The jury is still out on this one. For one thing, there's an argument to be made that you don't really know a language well enough to fully experience its literature if you can't watch its TV and chat about the weather in it. There's probably some weight to that.* For another, it's been a longing of mine for ages, to "really" (always such a suspect word, in interior dialogues!) learn a language. Is giving up on that giving up too much? I don't know. I'll mull it over. But it might be best -- it often is, with things one finds oneself procrastinating about -- to just pull the plug and decide not to do it.

I underestimated Joe Biden. He's a run-of-the-mill speaker and debater -- nothing to write home about -- and I took that as his measure, which was not very bright of me. Turns out he's a total professional, like Obama: he knows exactly how things work and what order things have to be done in, and who he has to put in charge of what.

As with Obama, my respect is grudging. I'm not a center Democrat. I wince at some of the appointments and policies. And we have yet to see how the battle royale about the filibuster turns out. But the man knows how to govern and administer. He's exactly what we need, at this incredibly delicate, fragile moment.

I got the first dose of the vaccine, last Wednesday. As a massage therapist, I count as a health care worker, so I'm in the first wave. It's a relief to know that, even as I dawdle and second guess and hang about, my body is busily manufacturing antibodies. In one way, nothing changes: none of my behaviors will change, for a while yet. But it feels totally different. We will win this thing, eventually.

Also: I am very, very tired.

*On the other hand: by the "fully fluent" argument, I've never read Beowulf, or Chaucer, properly. And how fluent is fluent? Being able to chat in Mexican, Chilean, and Galician Spanish (but not Argentinian)? Being able to chat with scholars about literature? There's a thousand different fluencies a person might aim for.

Posted by Dale at 6:03 AM
Email ThisBlogThis!Share to TwitterShare to FacebookShare to Pinterest

Is blogging social media? Or is it "writing." If so, is posting social media or is it short writing? When Hemingway wrote letters was it a waste of time? If you leave social media to try and control your habit the quality of my social media will deteriorate. Unfair I say! I will be force to smite you! Next subject: Take it from a Delawarian...Biden rocks...in too many ways to enumerate...although that is coming from a utopian that believes the path to utopia is be expanding the middle and pulling it in the right direction...which generally coincides with the left but not always.

1. SO GLAD you're underway for the vaccine!

2. Same, re: Biden. I noticed immediately that beyond the centrist stuff, I'd almost blonde-joked him in my mind: dismissed by affability or something. But he is significantly more than affable and able to hire good people (mostly) (comparatively). I'm feeling pretty happy to have had to self-correct and give him swift credit for real toughness, speed, decisiveness, and clarity of strength. Caveat argue, caveat argue, and surely I will, but the relief to find real competence in re: the pandemic, anyway. And it's always good to have to estimate UP one's estimation of someone with a big role to play, eh?

4. I hope you don't leave FB entirely, although I get it. I hate what it does on the brain-level. But man, in pandemic isolation, it sure is good to have the virtual version of the neighborhood benches with the pals.

Congrats to the first dose!
FB? I've signed out many years ago, too dodgy and too sinister in my book.

All through my school and uni years, I was convinced (and told repeatedly) that I was hopeless at learning modern languages. My language skills were atrocious despite the fact that I spent three miserable months on a high school exchange in the UK, seemingly endless extra-curricular hours learning French from native speakers to fulfill my language requirement for the linguistics (Chomsky) degree I had set my eyes on (failed it utterly) and all I could show was a dull and useless first in Latin and ancient Greek.
Until I fell in love with an Irish man who can speak fluent English, Irish and French but at the time, not a word of German.
Rapidly, almost overnight, English became my emotional language and has been since. I have lived, worked, published in and grown up with that language ever since.
And My theory is that if you have an emotional tie you will be able to speak, read, think in the language without reservation, if there is none, you will always struggle. (Unless of course you are extremely gifted.)
So, maybe fall in love?

Still working daily on my Spanish language foundation skills, using Duolingo after two years of high school Spanish more than 50 years ago. Will play with this beautiful language for the rest of my life, doing what I want to do in Spanish, what comes to me naturally in the time I have. Love Sabine's comment. I am in love with Spanish. In Spanish, I feel like a new person with new words to live in.

I did a ten-day social media fast and was mostly miserable. Yes, I learned a few things about how maybe to moderate my usage, but mostly I really missed the interaction with people I care about. ESPECIALLY in these pande,ic times when I see virtually no one in person.

Glad you’re getting vaccinated. Sure wish I were. I imagine it'll be August before I get my first jab.

Oh Lord, I hope it's not that long, Pascale!

Yeah, at the moment social media and our social lives are largely the same thing. Ai.

Gil, I don't know whether blogging is social media! Kind of. Although the blog worlds have grown so quiet that it feels like something else now. I'm totally with you, about politics: the U.S. is stuck with a two party system, and that means you need to participate in a party that can draw 50-plus percent of the vote, or you have virtually no say in anything. That used to bother me more than it does now. I'm less convinced that I'm right, for one thing. I could be horribly mistaken.

Jessamyn, yes! And yes, I do ponder Costa Rica, from time to time...

Sabine, I'm astonished that English isn't your first language! You write so beautifully in it. I assumed you were an ex-pat in Germany!

Am, I love Spanish too. It's a beautiful language. I first had Spanish lessons in the 2nd grade, and it enchanted me right away: those pure strong vowels, and the quick beat of the syllables!