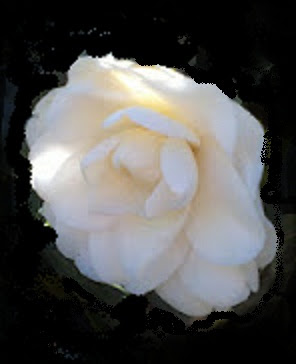 “Light,” he whispered. He would collect, slowly and laboriously, a sufficient radiance.

-- A Death at the White Camellia Orphanage

So Pip's story goes on, to the scary parts: where he goes about collecting light. Of course he does, because that's what human beings do: but Pip's working under such a deficit that he has no real thought for what it's going to do to other people, and to himself eventually, if he simply makes up his own rules and plunders it. Here's where the book turns into a book about me, and I find myself reluctant to pick it back up: at twilight the camellia on the cover hovers like a ghost on the end table.

Posted by Dale at 9:54 AM
Email ThisBlogThis!Share to TwitterShare to FacebookShare to Pinterest
Labels: White Camellia

(I stole the image from Marly's palace -- http://thepalaceat2.blogspot.com/ -- and doctored it crudely, by the way. If there are credits that ought to go with it, I hope Marly will show up with them)

These bits-as-I-go-along are my version of reviewing a book. I find the standard method of reviewing books to be very very difficult. To me, books aren't objects, to be described and evaluated: they're people I have long complicated conversations with.

The picture was by Mary Beth Kosowski, who is on the Mercer staff--the blossoms were on campus. And the book design was by Burt & Burt. (They got an Addy for last year's design of "The Throne of Psyche," and I'll bet they get another for this one...)

Well, I don't know the ins and outs of other religions on this matter, but the Bible says quite plainly that there is no marriage or giving in marriage in heaven... As does the marriage ceremony: "till death do us part." You were one flesh; now you're parted.

So, Dale: you'd probably have to be a Mormon or a Twliight kind of vampire to acquire a nicely laid-out concept of eternal marriage. (Of course, the vampire concept came out of a Mormon!)

However, from an imaginative point of view, I can think of all kinds of unleashed ways to solve some of those problems for you. Who says your self would only be one self? Who says a new body would have the same desires and not entirely new ones never imagined before? Who says your "flesh" would be made of the same substance? (Scary thought.) Would you even recall what and who you were? Perhaps you would be drawn to those you loved in this life without knowing why. Perhaps people who did no soul-building would be little shriveled beetle-like creatures, and people who did would be mighty invisibles with wings. Etc. Etc. Etc.

I like the way you look at things. Most people would say the scary part in the book happened at the start...

"To me, books aren't objects, to be described and evaluated: they're people I have long complicated conversations with. "

The ones I love, anyway. Or love-hate. The ones that get me by the viscera and don't let go. The good ones.

Yah yah, but do you think that's ever been the folk understanding, Marly? But I guess it's like karma in Buddhism, it isn't justice, it's nothing like justice, but at the folk level, at the feeling level, it inevitably becomes that. The Buddhist reincarnation is just the same, the theologians are very explicit and clear that you don't get to carry memory from one life to the next, but in the folk understanding people always waffle around it and magick it up.

@Jessamyn: thanks! Yes. And this book is one of those.

In fact, all that about marriage an immortality was arrant nonsense, wasn't it? The situation and the theology is no different than it was in Chaucer's day. Still I have have a feeling that the basic in-your-bones feeling of mortality or immortality has changed, regardless of whether people are nominally religious. Hmm.

Changed during my lifetime, I mean.

I'm taking this out of the post, but putting it here so Marly's comment will still make sense!

To embrace serial monogamy – everyone knows this, but no one seems to want to say it – is to accept that there is no immortal soul, at least not in any usual sense. If you really believed you were going to meet your first spouse again, then what were you going to do with your second? How are they going to get on together? Everyone sitting at one long table in heaven, first spouses, second spouses, third spouses, marriage lines crisscrossing the celestial table like power wires against the sky? Does the first spouse take precedence, or the last? Oh, there are no marriages in heaven, but then what the hell are there? And what's a life, even a heavenly life, without a marriage, anyway, for someone who loves a familiar hand on their belly, or the small of their back, as they fall asleep?

No, to really truly accept divorce, and a succession of marriages, as we have done in the modern industrial world, means that we think the dead die dead. That's what we really believe, whatever we may say. Whatever abstract sky-ey afterlife we may envision, it partakes so little of what we love down here that we don't even bother to try to arrange things here so they'll make sense there.

Progress, maybe. Or a failure of imagination. Or the simple triumph of wanting and needing over abstraction.