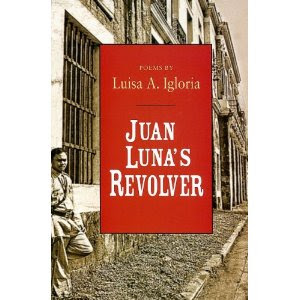 I'm drenched: a fine old-fashioned Oregon rain caught me on the way to Powell's. But I'm too old an Oregonian to fuss about getting wet. I found what I was looking for on the shelves: Juan Luna's Revolver. I beam at people as I trot down the sidewalks, weaving under awnings when I can. And then I settle down in the Virginia Cafe, hanging my jacket to dry on a little wooden peg. And soon I'm reading about Caillebotte's painting of a rainy day in Paris, and the teardrop gleam of an earring. Rain, rain outside the Virginia Cafe, rain in the Blue Ridge mountains, and behind those, our various experiences of rain in our homelands. Luisa and I are each specialists in a particular kind of rain; we can both view the European rain with a certain ironic distance. Here, M. Caillebotte, sit down and we'll tell you about rains: downpours that render umbrellas ridiculous; rains that darken the world to twilight for months at a time!

I stop to count the characters introduced in “Minim.” The poet and her daughter. The music teacher. Modigliani and his pregnant wife. Juan Luna, of course. The two gladiators dragged off in his painting. Retana, an art critic apparently? Should I know who he is? José Garcia Villa, the dismissed poet. That makes ten, in a thirty-four line poem, and yet such is our capacity for perceiving persons, and perceiving persons perceiving persons, that there's nothing even slightly confusing about it. The poet is speaking to us: in the first frame is her daughter and (at the end) the Russian emigré music teacher. The magazine opens to the world of Modigliani and his wife. Then the poet's thought ranges to the Filipino emigrés, Juan Luna and José Garcia Villa. Retana belongs to Juan Luna and so do the gladiators in his painting. We make sense of it all effortlessly. Luisa's right: the reader's mind can hold them all without strain. It is, in fact, how we ordinarily think: through cascades of personas. We don't really think about Modernism; we think about Modgliani. And we don't really think about Filipinos looking for ground to stand on in Europe: we think about Juan Luna. And I think, not about this book, but about Luisa. If I did not know her (do I know her?) I would have to invent her.


Well, I told myself I had to post on my massage blog at least once a week. It's funny, after all this time in the online world – I've been blogging, after all, since 2003 – how exposed and unnerved I feel, writing on a different “platform” with a different audience. And after all, I'm only, what, four? five years old? as a massage therapist: what do I know? And there's additional complexities to blogging when your professional persona is on display. I'm mostly writing to other massage bloggers (since they're the people who will respond to me – on Facebook, mostly; it's an odd sort of three-cornered conversation that usually develops, with people reading each other's blogs but conversing about them on Facebook) – but of course I always have an eye over my shoulder for the clients and potential clients listening in. And as health care providers, not to mention as decent human beings, we're all hampered by the fact that we can't actually talk about what we do, except in generalities and heavily disguised cases.

I had high hopes, when those movies started coming out where adults swap places with kids' bodies and go back to kindergarten or high school, that someone would take the opportunity to show how much of childishness and immaturity is simply a response to living in an authoritarian world of constant surveillance. But reviews didn't make it sound like anyone did, and I don't usually have the patience to watch movies. But I often think that if I was in public school again I'd probably behave just as I did then: sulky, balky, and given to tantrums and affected “weirdnesses.” And now that I'm blogging in a slightly new world I'm having precisely the same exposure anxiety, uncertainties, and fluctuations of tone that I had when I started up here at Mole. One thinks one has matured: but what's really happened is that one has surrounded oneself with supports and comforts.

Posted by Dale at 9:46 AM
Email ThisBlogThis!Share to TwitterShare to FacebookShare to Pinterest
Labels: Blogs and Blogging, Luisa Igloria, Poetry

Can't say much about the rain in Oregon, but the exposure part, now, that feels familiar as I am struggling with my own issues around setting up a blog about a world that is relatively new to me.

Yes. So many things to negotiate, so many public/private calls to make.

Oh Dale, I just love your writing here. It's the most natural thing to surround ourselves with comfort and support--part of the process of become ourselves.
And your review of Juan Luna's Revolver is one of the best book reviews I've ever read. [...] "cascades of personas." Precisely.
Looks like this forum's been good to you. I'll bet the massage one is, too. ;)

Ah, Dale, plus ca change, plus c'est la meme chose. When you were a kid you had tantrums and acted weird, Now you live in an authoritative world under constant surveillance. When I was a kid I mostly hid in shadows and corners, and now I live in an anarchic world where nobody notices me. You worry about exposure in your blog, and I think nobody reads mine. We each invent a world in youth and live in it for life. Isn't that funny?

Thanks so much, Jayne! Yes, actually people over in the massage world have been lovely to me so far. You're right, mostly I just have to settle in.

Anne, oh no, it was as a *kid* that I lived under authoritarian surveillance. At school. I do whatever the hell I want, now, and be damned to anyone watching :-)

You seem to me to have lots of readers!