On the Bicycle in Autumn 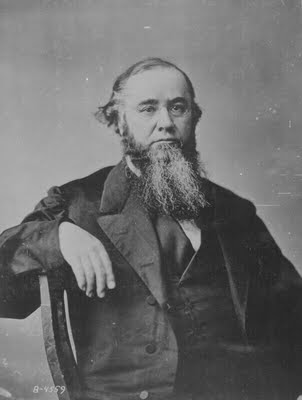 Edwin Stanton, U.S. Government Archives
I turn onto Stanton Street, a wild surf
of leaves running before me. The phantom
of the old Secretary of War, with his ragged beard,
gleams and is gone. Ball's Bluff.
Young men sliding down the cliffs to die.

Hooker, Burnside, Hancock:
these streets were named for Union heroes
forgotten now by most. (Fremont is a thoroughfare,
but I've never glimpsed McClellan:
the Far West had its own estimation
of the marshalls of the Great Republic.)

Swash and surge, dull yellow, duller brown.
The colors are rich but muted. Half the leaves are wet,
sodden, slick, and bunched; the others are dry --
violent yellow, hectic red, streaked with black;
even stubborn mutinous green.
Twigs and branches scatter on the road;
twisted fingers reaching for my spokes.

I dismount at the trophy shop and enter,
disheveled by the wind. The girl brings a brass
plaque, like a polished leaf: In Memory of
Mary Catherine Lamb. For a chair
in the library. Another soldier
struck down in quite another war, I think,
except there's really only one:
one long losing war. I fold the metal gently
in its paper wrapping, stow it in my pack,
and turn my bike for home. 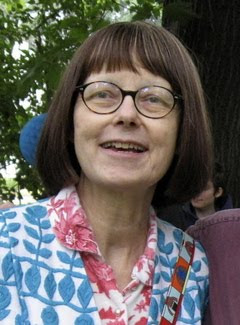 Posted by Dale at 8:58 AM
Email ThisBlogThis!Share to TwitterShare to FacebookShare to Pinterest
Labels: Civil War, Poems