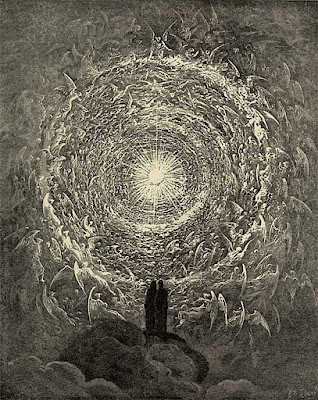 So how do I recover the knack for joy?
To be clear: I'm not trying to be happy. The transitory wash of feelings will follow its tidal rhythms, regardless of my actions or attitudes: content and discontent only function properly if they continue alternating. To want to stop the pendulum at one end of its swing -- to exist in perfect contentment -- is to want to stop the clock. That's not what I'm after.
But there's the foreground of happy and distressing experiences, and there's the background, or the setting. A person who is experiencing (non-acute) depression is not necessarily having an experience of the daily events of their life much different from mine: good things and bad things happen, mood lifts and falls. One of the commonest things people say after a suicide is "My God, I talked to him just hours before that, and he seemed fine." He probably was fine then, as far as it goes. It was not the foreground that was the problem. It was the background. Is there a net of joy under us, waiting to catch us, or is it a horrible, airless vacuity? That's what's different. We may never fall, for good or ill, but the experience on the tightrope is fundamentally different, according to what we think we would fall into if we did.
It's natural enough to cast this in terms of afterlife, but it doesn't need to be cast in those terms. I'm fairly sure that my consciousness will simply stop, when I die. Poof. After that, it's not my problem, nor anyone else's. But we live in time, and we imagine it, willy nilly, coming before and after. Where are we coming from, and where are we going? These nonexistent spaces, are they full and radiant, or empty and horrible? It's a nonsense question, put in those terms: it's undiscoverable and unfalsifiable. But we answer it whether we mean to or not.
There have been seasons when my conviction that the nonexistent spaces were full and radiant was very strong. And seasons, as now, when it has dwindled to a queasy hope.
I'm describing this as if it were a question of fact to be discovered, which it almost certainly isn't. That's just the way we talk. We make up the answer out of moments of transcendence, moments of exquisite joy or clarity or awe. It doesn't take much. But it does take some. It takes at least the possibility that, at any turning, anywhere, any time, something overwhelmingly beautiful and dangerous might appear. So those moments, and how we hold them, matter disproportionately. Hence the daily prayer, the daily ritual, the meditation, the weekly ramble in the Gorge. Not because these moments can be summoned. They can't. But if I don't deliberately put myself in their way, they can be missed: and if I miss them too often, I may come to distrust them entirely, or forget them. And then I'm really lost.
So there's my answer, in a nutshell: I've lost the knack for joy because I've stopped putting myself where it's found. I've stopped looking for it. I don't think it's any more complicated than that.
Posted by Dale at 7:51 AM
Email ThisBlogThis!Share to TwitterShare to FacebookShare to Pinterest

Why would you connect joy to happiness?

But then, I have never experienced depression, my unhappiness has been brief, my sadness can be profound, my joy is rare and when it appears it comes as a gift.
I may be of my depths here. Apologies if this is misplaced.

I guess there are three distinct things here, all commonly referred to with the word "happiness": 1) ecstatic experience 2) ordinary passing pleasure 3) a life worth living. I think we get in all kinds of unnecessary philosophical difficulties with the mushiness of our terminology. Especially when you get into translated texts, opportunities for misunderstandings multiply rapidly :-)

There is some faint family resemblance between eating ice cream and seeing the stars on a dark night in the desert -- I mean, they're more like each other than either is like listening to a lawn mower -- but it's a pretty dim one.