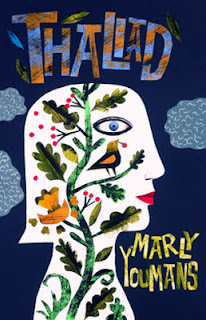 I've been reading Marly Youmans' epic Thaliad. Lovely, lucid blank verse: hardly ever a foot wrong. It's strange to read modern matter in so sure a classical voice: the effect is like the reflections of the sun, playing on the ceiling of a lakeside house. Where is the light coming from? What is it that is moving?

I hope readers will not be put off by a modern poem being called an epic. “Epic” has come to mean “gargantuan” or “undisciplined”: it's used of great sprawling things, and, particularly in modern poetry, of monstrously fleshy lyric poems stuffed with obscure allusions, and no narrative skeleton to hold them up: things like Pound's Cantos get called “epics.” It leaves us no name for the Thaliad, which really is an epic: a rapidly running, easy-to-follow narrative poem. Those who don't like poetry can ignore the fact that the right margin is ragged, and read it as a quick short utopian/dystopian novel.

In any case, my response to finishing this poem was – as I know it has been for others – to turn immediately to the front, and begin to read it again. Epic is always an attempt to find origins, isn't it?

Such time, such toil, requir'd the Roman name,
Such length of labor for so vast a frame.

But in this case it's the origin of something that's not there yet, of something made up. What does it mean, to undertake a retrospective on the future? Where does that phantom come from? Is the whole epic untimely ripp'd? I can't settle. I feel like Ran, patrolling against what he doesn't and can't know. But having finished, I turn at once to the beginning, to read it again, which is of course what one always does with a genuine epic. They begin in the middle of things because they understand that everything is in the middle of things: they're structured as a wheel, and its first revolution is only to orient ourselves. More anon, I'm sure. My first journey in Thalia's footsteps has been, of necessity, silent.
Posted by Dale at 8:55 AM
Email ThisBlogThis!Share to TwitterShare to FacebookShare to Pinterest
Labels: Marly Youmans, Thaliad

It's really quite glorious, isn't it? Extraordinary. Bright and dark and amazing, all in one.