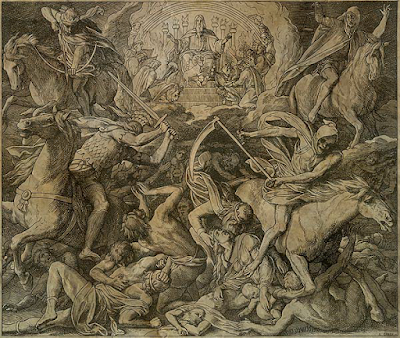 I have, reasonably enough, focused all my health energies on eluding the three horsemen that are waiting for us most of us monkeys-turned-sedentary-snackers: cancer, diabetes, cardiovascular disease. They'll take down three quarters of us. I have not given much thought to my health beyond that, since escaping all three, and especially cardiovascular disease, seems unlikely. But sparing a thought for it, it strikes me that if those three horsemen miss me, it's exactly this -- "throwing my back out" -- that is likely to take me down. Oh, they won't write it down as "cause of death." But if you've watched someone decline due to age, you'll know it's a step function: one after another, events knock them down that they don't come back from. Falls, illnesses, infections, car accidents, whatever they are: eventually there's something that they don't rebuild from at all. This is my fourth horseman: someday my back will go out, and I'll stop exercising for good, and then I'll be in the end-game. When the wolf pack catches up with you, it doesn't really matter much which particular wolf takes you down.

I should learn more about this, about how to train my back to be stronger and more resilient. More of the same may improve my pull-up and push-up numbers; it may improve my endurance, and make my heart, metabolism, and skeletal muscle healthier; but it's not going to fend off this fourth horseman. This, I belatedly realize, is what Peter Attia means when he harps on "stability" as one of the pillars of longevity. The temptation, always, is to train what's already strong. But what I need to do is train what's weak.

It's not that I haven't tried to train my back and my glutes. I have. But it always progresses like this: progressive strength gains, followed by throwing my back out again. Which makes me think: if this problem were going to be fixed by deadlifts and lunges and hip thrusts, or by slow deliberate stretching, it would be fixed by now. (There's always the possibility, of course, that it's unfixable: but I need not settle on that until I've tried more things. There's always time to come to that conclusion.) What I haven't tried is different styles of movement -- light, rapid movements with unexpected twists and turns, for example. Or various exercises at the ends of movement ranges. I overdid my little sprints, perhaps, but I suspect they were one sort of thing I should do. (Not daily: that was stupid. Recovery time, kid: recovery time.) Or something along the lines of hopscotch, maybe. My friend Norman tells me that he cured his back pain by taking up table tennis. That makes a lot of sense.

Posted by Dale at 8:36 AM
Email ThisBlogThis!Share to TwitterShare to FacebookShare to Pinterest

And Egoscue. Removed thirty years of pain from me. Can't recommend it enough, although there are many people in my orbit who say I certain can and have...plus, and this always flags suspicion in dedicated people, it's easy.

Oh, yeah, I keep meaning to look into that! Thanks for reminding me. You have a bible of sorts for that, don't you? A particular book?

Death, by the way, is only the enemy in the context of the game. I'm a Portland Thorns fan, so in the context of a soccer game the North Carolina Courage is the enemy. Really, of course, they're a fabulous bunch of talented athletes. And really, death is a consummation devoutly to be wished. It's not the enemy in the sense that (to me, as a Buddhist) Confusion is the enemy. After the game we can all go out for a beer together.

You've given me much to think about once again. Good to know that your back is healing once again.

Now and then, since I was in my mid-20s and as recently as a few months ago, I have had bouts of low back pain that, although infrequent, have increased in severity in recent years. The first time I remember having low back pain, I recall being given some exercises to do by a physical therapist. I have no recollection of what could have caused the first episode of low back pain. I don't remember any other worrisome bouts until I was 34 years old and had just begun working as a medical transcriptionist. Sitting at a desk in front of a computer and typing for around 6 hours a day was not something I knew how to do naturally. I quickly developed low back pain and went to a physical therapist who worked with me on proper sitting posture.

During the years I was well paid as a medical transcriptionist, I paid for regular massages and other body work and had few instances of low back pain.

I've practiced yoga since I was in my 20s. As early as in my 30s and then in my 60s, I began to find that I needed to let go of various poses that clearly caused either neck pain, knee pain or low back pain. The last few poses I have let go of had begun to trigger bouts of low back pain that lasted for up to about 10 days, beginning acutely and gradually healing. They did put the fear of being disabled by back pain into me. In the past year, while experiencing a bout of back pain, I mentioned it to a friend who teaches yoga, and she recommended the bird dog pose as a way to strengthen my low back muscles. My yoga practice is now heavily weighted toward asanas that strengthen my lower back. Building up to the bird dog pose slowly and then regularly practicing it has definitely helped my lower back stability. Too vigorous of a bird dog pose with too many repetitions at the beginning is not a good idea.

At age 71, I am now 5'6" inches tall instead of 5'7". My yoga teacher friend noted that with age-related loss of height, our backs become more vulnerable to injury. I'm going to keep doing yoga and refrain from thinking that I can do the heavy lifting I was once capable of. It is clear to me that my bouts of low back pain in recent years have resulted from heavy lifting or yoga poses that are no longer in my best interest.

With every mistake, we must surely be learning (George Harrison)
(-:

I had my share of back pain, long story starting with my mother insisting that I, aged 12, get back on that horse after a spectacular fall (my last day with horses ever), one car crash, two sets of spinal surgery, 1995 and 2016, and all the passive and active physio, yoga, pilates, heat, stretching, whatever you can think of. I am fine, mostly.
My one and only tried and tested approach: any movement, in moderation if needed, more if possible, my back pain does not go away when I lie still. That and heat.
The key for me is maintaining strong abdominal muscles (to balance my weakling lumbar spine) and those little muscles that sit right above and all along the spinal cord. The best way to train these is - for me - to balance on one leg or the other as often as possible, e.g. while on the phone, or brushing my teeth, or waiting for the penny to drop, whatever.

Am, yes, so much of this is trial and error! I'm beginning to suspect that my last two bouts with back pain are probably attributable to too much stretching of one particular sort (that created undue lumbar flexion): and the maddening thing was I didn't have the slightest use for that particular flexibility. I just had a notion that I should stretch my hamstrings -- plus a notion that these stretches would do that -- and my guess now is that both those notions were dead wrong. Negotiating the declines of age without giving up too much too soon -- that's going to be tricky.

Sabine, yikes. I forget how fortunate a physical life I've had! Trivial injuries, no surgeries, no major illnesses. Yeah, I find movement is the best medicine: I keep doing what I call "ghost exercises" all through one of these back episodes -- I think it's important to keep my body on notice that it's still going to be doing all these movements, even if it can't do them forcefully at the moment. So I still go through as much of my daily life and exercise routines as I can, even if they're pretty sketchy and unloaded. (And yes to standing on one leg!)