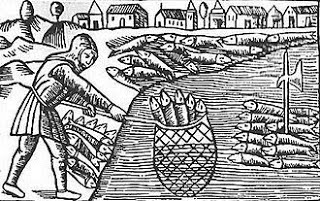 Huh. Okay, last night was the canned herring with lemon and pepper. The idea was, I'd eat 300 calories' worth of them, and add some olive oil to the potatoes. Upon opening the cans, I abandoned the oil idea at once. They're not kidding when they call them "oily little fish"! Even I, who adore fats, was not going to add more oil than that. That was plenty.

Once again, I'm startled by how much food my 100 grams of hamburger translates to in other proteins. No wonder beef tastes so good! A calorie bomb.

There's bunch of stuff thrown in with this version of the herring -- this is definitely processed food we're talking, here -- but I don't think you could seriously argue it was, nutritionally, a worse dinner than the burger and ice cream. And it was delicious.

(One advantage of eating precisely the same dinner for four years straight, I suppose, is that anything new will seem marvelous.)

So here is a second success. Today and the day after I'll be finishing up my ground turkey. Then probably it's on to the canned salmon. Science marches on.

One of my many unexamined dietary assumptions was that a person should seek a steady state, a perfect calorie intake, and stay there. From my recent reading, this appears to be wrong: actually cycling through periods of glut and deprivation is what the system is designed for, and both states confer advantages that a steady state will not. That, at any rate, is the hypothesis I'm working from now. Not big swings in body weight -- not ten pounds a go -- but some alternation of surplus and fasting. In a period of glut the body builds muscle much more readily, and muscle mass is good for you in a couple different ways, practically and metabolically. And at some point in a period of fasting the body kicks into "conserve and repair" mode and starts cleaning up damaged cells and mitochondria. Then you get shiny new cells with snazzy new appliances, if I understand right, but more importantly, you stop the old senile cells from sending confusing and inflammatory messages to all the other cells in their neighborhood. This clean-up process is called autophagy, and it's thought to be why calorie restriction sometimes extends lifespan.

The catch, for the humble end-user of this theory, is: what counts as a "fast"? 16 hours daily? 1 day every 2 weeks? five days per quarter? And how much calorie restriction: 50% 75%? 100%? Nobody really has any idea what the ideal protocol would be. Autophagy turns out to be a difficult thing to detect: you can't just prick your finger and get a number for it. Presumably some clever person in a laboratory will figure out how to do this, at some point; but for now, it's just guesswork. My plan is to do what seems offhand to be easiest, which is one day (36-hour) fast every two weeks. I'll give that a shot next Tuesday. It doesn't seem (in prospect) all that difficult to just not eat for a day.

Posted by Dale at 7:33 AM
Email ThisBlogThis!Share to TwitterShare to FacebookShare to Pinterest
Labels: Fasting

The two-phase thing is, in fact, largely speculative and not yet very usefully observed in human beings: but as Peter Attia points out, it's been observed where looked for in species from yeast to mice, and there's no particular reason to think we dealt ourselves out of the game.