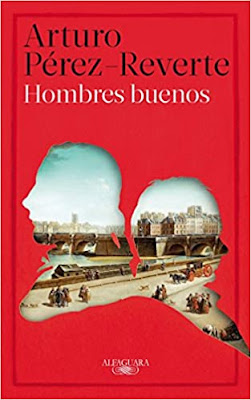 I am reading, for the second time, Hombres Buenos by Arturo Pérez-Reverte. It deals with two members of the Spanish Royal Academy who, toward the end of the 18th Century, undertake to travel to pre-revolutionary Paris, purchase the French Encyclopédie -- the distillation of Enlightenment thought -- and bring it home for the shelves of the Academy, despite the fact that the work is (theoretically) banned in both nations. They have a dispensation for the Academy from the Spanish king, but the task is a tricky one, nonetheless; the more so because vested interests in Spain are keen to keep the Encyclopédie out of the country, and dispatch an agent to follow them and to ensure their failure. So, as always in Pérez-Reverte, there is a boys' adventure story at the heart of things, to which we can turn whenever the struggle of the enlightenment becomes dull. And, also typically, there is a double narrative: we move in and out of the historical narrative, and Pérez-Reverte's first-person narrative of his discovery and investigation of the book-hunting expedition, which serves both as a relief from the 18th Century, for the historically short-winded, and a proof of Pérez-Reverte's care for historical accuracy.

The two members of the Academy -- the Good Men of the title -- are the Academy librarian, Don Hermógenes Molina, and a retired naval officer, Don Pedro Zárate. We follow them under the nicknames  of Don Hermes and el almirante (the Admiral). The heart of the story is the exploration of the extent their commitment to Enlightenment ideals; the most endearing qualities of both being the places where they simply cannot and will not follow Reason. For Don Hermes, the line stops at Church and King: a world without royal and religious authority is one that he can't contemplate. For the Admiral, it stops at the honor of a soldier. Or perhaps it's at fighting over male status and the sexual favors of beautiful women? Is there a difference? He is not sure, and neither is the reader. In any case, there is a sword-duel at dawn which is everything a boys' adventure aficionado could want. And of course, brooding over all is the impending revolution: we are well aware that the elegant Parisian philosophes and dandies of the narrative are headed, in a few short years, for the guillotine. It's all going to get very real very fast.

The book will feel very old fashioned to readers for whom the Enlightenment is remote and unimportant, a done deal; and that will include a lot of modern literary people. What have we to do with the tug-of-war between Reason and the Church, or between Reason and codes of honor? But to Pérez-Reverte, and to many people in the world, it's not a done deal at all. It's still a central, inescapable question: how much can we cede to Reason, and where must we balk? How much reality can we bear? How much should we bear? The political stresses of present-day America suggest to me that these questions are as active and important as ever, however  irrelevant they may feel to the present professional-managerial class.

Posted by Dale at 8:41 AM
Email ThisBlogThis!Share to TwitterShare to FacebookShare to Pinterest